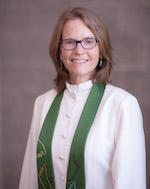 Pastor Laurie was called to FPC Marshfield on November 1, 2017 as Pastor/Head of Staff. She was ordained as a Minister of Word and Sacrament in the Presbyterian Church (USA) in 1992 by the Presbytery of the Miami Valley, in Ohio (not Florida?), where she served four congregations in Xenia, Springfield, and Dayton, from 1992 – 2017. She earned her Masters of Divinity from San Francisco Theological Seminary in San Anselmo, CA in 1992 and her Doctor of Divinity in 2017 from Columbia Theological Seminary in Decatur, GA. She grew up in New Jersey and Kansas, earned her B.A. from the College of Wooster, in Wooster, Ohio, and met her husband, Bob, in Newark, New Jersey. They were married in California, in 1980 and have two young adult daughters, Emily Badillo and Hannah Berget, who live in Minneapolis with their husbands, Matthew and Karl. On March 27, 2018 their first grandchild was born, Isabel Rae Badillo, to Emily and Matt. E-mail Pastor

Carmen Lawler began serving as the Christian Ministry Coordinator for FPC in November of 2016. She has a B.A. from Northwestern University and a Masters of Education from Indiana University. She has worked as a research assistant in several medical research labs, as a middle school science teacher in Peoria, IL and Hanover, NH, and as a stay-at-home mother. She met her husband, Benjie, while an undergraduate at Northwestern. They were married in 1995 and have two children, Madeleine and Calvin. They came to Marshfield in 2002 and have been attending First Presbyterian Church since 2006. E-mail Carmen

Greg lives in Marshfield with his wife Theresa and son Sam. His daughter Kirsten and her husband Jason live in Peoria, IL.
Greg grew up in Iola, WI. His brothers’ families continue to reside in Wisconsin, one in Clintonville, and one in Hortonville.
Greg received his undergraduate degree from the UW Eau Claire and his Master’s in Vocal Music Education from the UW Steven’s  Point. His vocal work in the Athens school district for three years was followed by 17 years teaching vocal music to grades 7 – 12 in the Colby school district, six years in Marshfield at the elementary level and the past six years at Marshfield Senior High.
Greg has greatly enhanced the musical milieu of our community not only through his teaching of students but also through his Campus Community performances since 1983 and as director of the Central Chamber Choral for the past 13 years. In his spare time Greg loves to spend time with his family and work on renovating old houses.
Greg is a member of our congregation, enhancing our worship and ministry through the sharing of his talent and, oh yes, his humor.

Kathy Phillips took over the role of handbell director in the spring of 1998. She had previously directed the handbell and adult choirs at her former church in Fort Dodge, IA. After 32 years of teaching, Kathy retired from her position as a band director with the Marshfield Public School System in June of 2014.  In addition to volunteering in the Marshfield community, she and her husband Phil enjoy visiting family, golfing and gardening.

Hello, my name is Therese Brooks. I have been the Nursery Coordinator/attendant since the spring of 2005. I have 4 young adult children; Danielle: and Triplets Chris, Corey and Cody. I have always had a great love for children, especially little children and babies. I have no professional schooling, but babysat since I was 11 and then raised my own family. In First Presbyterian Church Nursery, babies and little ones through age 3, receive loving compassionate care, but also I try to keep my care along the Christian guidelines of loving, sharing, and caring for one another. We read stories and sometimes sing songs. There are many toys which teach pretending and also many fun developmental toys. I personally greet each child and parent and try to keep the experience as upbeat and fun as possible. I always encourage parents to stay with their child or children as long as it takes the little ones to become comfortable.

Meranda attended the University of Minnesota, Crookston where she earned a  Bachelor’s of Science in Applied Studies and Business Management with an Emphasis in Communications. She says through the years she has relied on her faith to get her through the hard days and owes much of her success to the mentors and friends (of all ages) she has met along the way. E-mail Meranda

Angela joined FPC as Treasurer in June of 2018. She has an Accounting degree from Mid State Technical College and a Business Administration Degree from Lakeland College. Angela has 20+ years of accounting and business office management experience. Angela has one daughter, Brittany, and two grandsons, Giovanni and Javier. E-mail Angela