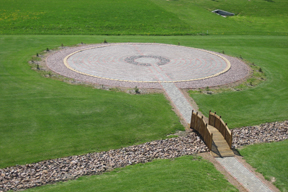 The labyrinth was built with funds that were donated in memory of Sharon Groff. It was constructed with the volunteer labor of friends and family of Sharon.

Sharon died on October 16, 2003 following a seven year journey with breast cancer. There are many points of reference that link the labyrinth and Sharon’s life.  The manner in which it was built is similar to the community’s involvement in her care. Many hands carried paving blocks, pushed wheelbarrow loads of granite and shoveled rocks. In a similar manner community members participated in the Share the Care group that provided help and healing during Sharon’s last year: accompanying her to medical appointments, meditating with her and taking her for walks in the fall air.

A similar labyrinth was constructed at Sharon’s residence. During the last 6 months of her life she traced the paths daily. On account of her testimonials members of the community suggested that a labyrinth be installed in her memory here at First Presbyterian Church.

Sharon was dedicated to promoting peace throughout her life. Twenty five years ago she made the pages of Newsweek speaking out against the weapons of mass destruction being deployed in the Seattle area where she lived. In the winter of 2003 she was on the streets of Wausau urging non violent resolution to the United States government’s disagreements with the Iraqi government. However, she increasingly recognized the need to obtain inner peace. As is emphasized in Scott Hunt’s book The Future of Peace, until we calm the turmoil within our own minds it will be difficult to calm the turmoil around us.

To quote one of Sharon’s emails to Mindy Gribble  from July 2003, three months before Sharon’s death:
“Tomorrow we meet the Hospice nurse at 2PM. Feels like a good time to take this step. I’m surprised that in the midst of all this I remain hopeful. I’m not sure what exactly that hope is, but it is hopeful. Although walking the labyrinth is a daily event, usually not with terrific insights, today was different. With the events of the day ahead, it bubbled up in my head that Love is more important than the state of disease in my body. Good thing for me to remember as I interact with people, and so it was. I can truly say it has been a good day.”

History and Use of Labyrinths

The oldest discovered labyrinth was created about 4000 years ago. As with many pre Christian symbols, the labyrinth has been incorporated into Christian spiritual practice. However, it is not linked to creeds and doctrines thereby being accessible to practitioners of many denominations and religions.

Labyrinths provide a substrate for prayer and meditation. To quote the words of remembrance spoken by Sharon’s good friend Ellen Kroeker at the Memorial Service:

We came at a similar time to a new way of walking. Of walking as meditation and began talking to each other of labyrinths. Talking about how often what seems like a dead end in a labyrinth or in life turns to open a new path. Talking about how our perceptions have us thinking that we are near the center when we are really a long way off from our center. Of how discouraged we can be from our distance from a goal, when we are really only a few turns away. The path, our journey is a good one .

Walking the labyrinth can also represent the threefold path of purgation, illumination, and union. As you enter the labyrinth purge yourself of anxieties, fears. and hindrances that prevent hearing God’s voice. At the center pause to receive inspiration or bask in the calm of shedding whatever obstructs your vision of God’s Kingdom. As you trace the path out of the labyrinth spiritually and mentally rejoin the world around you less encumbered and more enlightened.

The Labyrinth is open to the public.  Please stop by at your leisure to enjoy walking the Labyrinth.